Hey. We’re back again for round two. Home Truths Melbourne was a hit last week, with more hits than we ever expected for the premier posting. Thanks to those who voted in the poll, Depot de Pain on Rathdowne Street was the winning brekky venue which is duly reviewed in this Home Truths – keep your eye out for a new poll each week. In this week’s Home Truths we feature four auctions in Melbourne’s inner-north from the 26th of March, 2011. Can you handle the Truth? 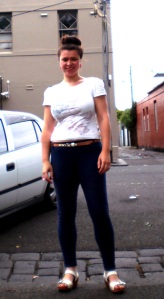 You voted, we attended. Prior to beginning our auction run (along with it seems half of Melbourne, the auctions were all very well-attended today), we supped at the new Depot de Pain (voted by you!) located at 693 Rathdowne Street Carlton North. Right in the heart of the Rathdowne Village, this little gem is nestled not-so-far from popular Belki and almost directly opposite Curtin Square. Beautifully decorated throughout with a range of different seating possies (looking over Rathdowne, nestled in an antechamber or looking into an internal courtyard), Depot de Pain will suit anything from a big croissant-fest with girlfriends through to a cautious first date. Francophiles rejoice – even their welcome will warm your tummy. Checkout the front door image below. Charmant, n’est-ce pas? 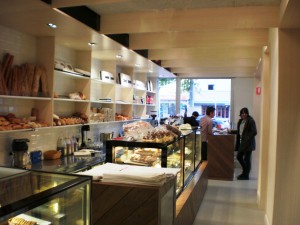 Home Truths was warmly welcomed by owner Christopher Vivian, who chatted us through the impressive menu (available in addition to an array of Willy-wonka-esque patisserie and quality baked breads). We chose to imbibe a long macchiato and a croque monsieur, although Christopher recommended the Oeuf Hollandaise en Croutade with sides as their hero breakfast offering. The croque was delicious – a great mix of slightly piquant cheesy interior with a crisp buttery exterior.

All this luscious smoked-ham and Gruyère cooked to golden perfection in french clarified butter. Be still my beating heart. Literally.

Other things you might not know about Depot de Pain is that they also supply their delicious breads to Le Parisienne on Lygon Street, and that they are related to the excellent French Fantasies in South Yarra. This is a lovingly designed mecca to both quality breads and beautifully executed french foods, and replaces the gap in the Carlton North market now that Bagatelles has closed. Christopher also has a pantry of premium quality smallgoods which you can use to whip up your own french fantasy. Ahem. 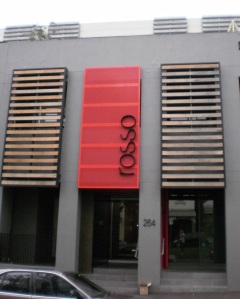 Punters: This part of Carlton is right near the hub of Lygon Street (aka Brunetti, Readings & The University of Melbourne), so it’s a safe investment bet. As such there were a healthy mix of investors and owner occupiers vying for the home. Very cool-looking fash-forward bidders!

Review: This was a one-bedroom apartment, located to the side of the block. It had no views, and diffuse light through warehouse windows to the laneway. I personally really love Rosso, with its hushed corridors and designer fittings. The apartment had access to a fairly large courtyard which could certainly be dollied up with an outdoor setting and plants… but it did have some privacy issues. The kitchen was scandinavian-chic blonde wood, and there was a full walk-in-robe in the bedroom. Sweet.

The auctioneer was the experienced Carlton Hocking Stuart Principal Scott McElroy. (Inset below)

Scott had great starter banter, really illustrating the benefits of Rosso as a development. Unusually for a contemporary development, Rosso has very low body corporate fees. (Rosso means red in italian, and is not a colloquial aussie nickname in this instance.) Scott made mention of the ex-warehouse’s former incarnation as the location of University Press, as well as its great potential for investment return from the many students who lease in the area. The auction was opened up quite swiftly at 360k, and continued upwards in rises of 10k with little encouragement necessary. Scott was strong in dialogue, and continually refused to break down the bids to 5k or 2.5k until necessary. The property had three bidders, and pulled up at 400k where it was passed in and negotiated. The property sold for $420k.

Slightly blurry, although a lovely happy photo of Ben Harrison – the listing agent for this property. He’s not doing the Time Warp.

Punters: This home on superbly large land was also opposite the Edinburgh Gardens, which meant that the punters at this auction were mostly family purchasers and requisite neighbourhood local yokels. There was also one really cool little boy who had a Ben 10/Power-Rangers outfit on who seemed to be bidding furiously. 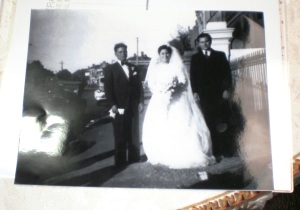 The image above was next to the Contracts of Sale and Auction Rules, and was a lovely reminder to the buying public about the legacy nature of this home. It had been in the same family for a long time, as evinced by the wedding photo taken outside 26 Grant Street circa 1950’s. A charming touch. 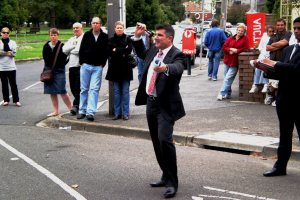 Review: This home was very well loved. It was a three bedroom home, but every room was immaculately and girlishly furnished (lots of roses!). You could really tell it was the end of one era and the beginning of another for this home. Perfectly located opposite the Edinburgh Gardens and near a gigantic fun-looking playground, it is also near the heart of Queens Parade and its bevvy of niche shops. John Costanzo called a brisk and efficient auction, making the most of the home’s 350 square metre land size and location. There were three key bidders throughout the duration of the call, which started off swiftly with an opening bid of 1.1 million. Rises of 10k continued upwards as the value of the home rose to 1.4 million before being called on the market. The bidding was so fast at one stage, John’s arms were flying and he acknowledged he was ‘doing the Macarena’. The home eventually sold under the hammer for $1,605,000 – a princely sum.

Beautiful old facade of home opposite 26 Grant Street, Fitzroy North. A reminder of the history of this unique area.

Punters: It was like a Ramones convention at this cutie-patootie extra-wide single fronted home. So many Generation X’s you couldn’t swing a cassingle of Teen Spirit. The price quoted on this two bedroom residence with good-sized courtyard area was $550-600k which is at the lower end of the scale for a quality property. Perfect for a young couple or single person.

Review: Rutland Street is sequestered away on ‘the other’ side of Hoddle Street, past Schots home furnishings. The streets are quaint, but it’s a little isolated. This home was located opposite a rather sizable block of 70’s era housing commission flats, and the road finished up at the freeway. That said, the council had provided substantial sound-reducing walls to cut down on noise pollution. As auctioneer Arch Staver aptly pointed out ‘You should buy this house because it’s cheap’. Arch encouraged buyers to bid, and a bidder swiftly stuck their hand in the air at $480,000 for an opening bid. Arch graciously accepted, and noted that bids at that level made him feel like they’d ‘turned back the clock’ and stepped back to a property market from a decade ago. Several bidders pushed the property to 606k where it was announced on the market, before finally selling for 645k. A swift, engaging and professional auction which was enjoyable to watch.

Punters: This was an older crowd, full of local faces from previous auctions in the area. It appears that the whole neighbourhood was out to see this Carlton North icon go under the hammer. As the home was a unique offering, I can’t suggest it appealed directly to any one demographic. 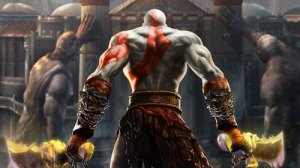 The interiors of The Cotton Mill, 60 Curtain Street were awesome. They had a definite Grecian vibe going on, with weathered copper heads on dramatic doors in the living zone. Very God of War (Playstation 3 Game, image above) inspired in aesthetic.

Review: 60 Curtain Street (also known locally as The Cotton Mill) sits grandly opposite Curtain Square, a unique brick building that looks like it’ll last another few hundred years guarding over the park. What a space! Definitely a niche-purchaser product, as the home is over three stories with stairs of varying degrees of difficulty on each. But so rich with history, and a home well-lived in. The ground floor had a unique living zone with ‘God of War’ style decorations, bathroom and a contemporary kitchen. Upstairs was another living area with glowing floorboards and park views, plus a separate study or third bedroom. Tom Roberts (auctioneer) spoke further about The Cotton Mill’s history, and noted that it has been a place that Paul Kelly and Archie Roach had recorded music. He spoke of the current owner’s love of the house, as he had purchased the home for the first time in 1982, sold it in 1989 – before repurchasing it again later. How Elizabeth Taylor–Richard Burton a love affair!  The auction itself was unfortunately quite silent, with Tom Roberts doing his very best to try and engage bidders in the process.

A live opening bid was underwhelming at $1.00 million on the knocker, which was swiftly followed up by a vendor bid at $1.1 million. The property was eventually passed in (after a brief vendor referral) for $1.2 million. It is now privately on the market for $1.280. Grab it while it’s there if you have a spare $1.28 million hanging around as this is a unique home, just waiting for an equally unique buyer to come along.

Well, that’s the end of Home Truths Two. If you’ve got any property coming up you’d like our journos to review, tell us in advance by emailing info@rubyslipper.com.au Also, make sure to vote in each week’s poll. This week lets you choose which Carlton Auction Home Truths attends.

We hope that you also enjoy the new Vitalsigns page with weekly Victorian Auction Stats, and hold tight for the upcoming Agentsays page. The best of Melbourne’s estate agents telling all!

See you next Saturday!

*Home Truths Melbourne has gathered this information to provide an interesting document for readers and subscribers. Information contained herein is gathered from a range of sources including but not limited to; local press both virtual and hardcopy, Valuer General Information & Agents own investigations. All efforts are made to verify the information provided. The information is not to be relied upon or used in dealings with third parties and people should make their own investigations regarding their own property or personal circumstances. Opinions and observations offered should not be treated as fact.