This week Hometruths felt like an elated pirate on a stilled boat in the ocean. Not because we stole booty *ahem* from unwitting East India liners, but because the wind started to move on the high seas of the Melbourne property market. Ahoy, me mateys – we’re getting back to business! Hometruths Eleven has several treats for you to enjoy , and lots of pirate jokes too. Enjoy the start of your working week with the knowledge that the market is improving and buyer sentiment seems so much brighter. Better get on with buying your house, landlubbers!

Vibe: Cheered verily by the perfect blue sky and Tasmanian-white light this Saturday morning produced, Hometruths chose to be chic, warm and mysterious at all auctions and snacking adventures in Melbourne’s inner-north.

Did you know that our editor is competing in Run Melbourne this coming Sunday, 17th July? Yup. We’ve gone from zero to 5km hero and in aid of that very gambit we’re eating healthily in our own kitchen. So, instead of an inner-north brekky review you’ll get a Hometruths Melbourne inourkitchen review. Depicted above : healthy, golden and luxurious – porridge with full cream milk from La Latteria on Elgin Street, sprinkled with cinnamon and topped with poached apricots. All washed down with a queen-sized Twinings Lady Grey Tea – all in beautiful iittala porcelain. NB: Our Run Melbourne effort also raises funds for Hometruths Melbourne’s charity of choice – Fitted for Work. Click here to donate to Hometruth’s effort (even a fiver, brother!) for this Sunday’s charity fun run. 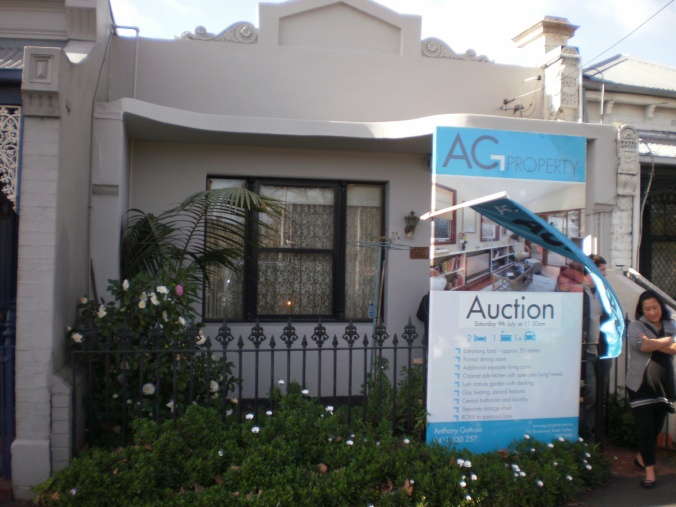 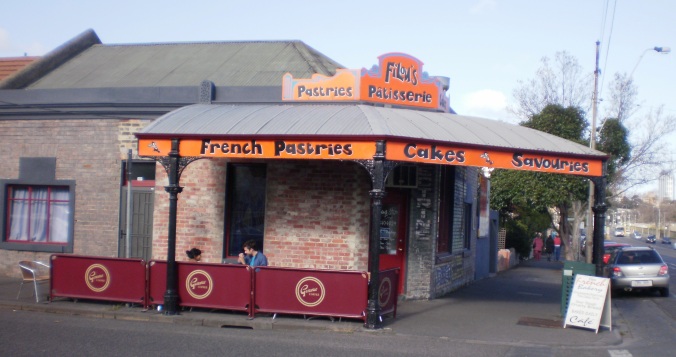 Who wouldn’t have a house a few doors up from North Carlton’s famous Filou’s Patisserie on their wish-list?

Punters: For the first time in a few weeks, I saw happy, positive and non-grumpy buyers. Hallelujah! Sometimes a nice house attracts nice people – nice vendors, nice agent, nice buyers. 774 Lygon Street’s auction was a karmic love-in of decent treatment and respect shown between all parties. It was a mature crowd, mostly families and older people – the auction crowd numbered around 30 punters. 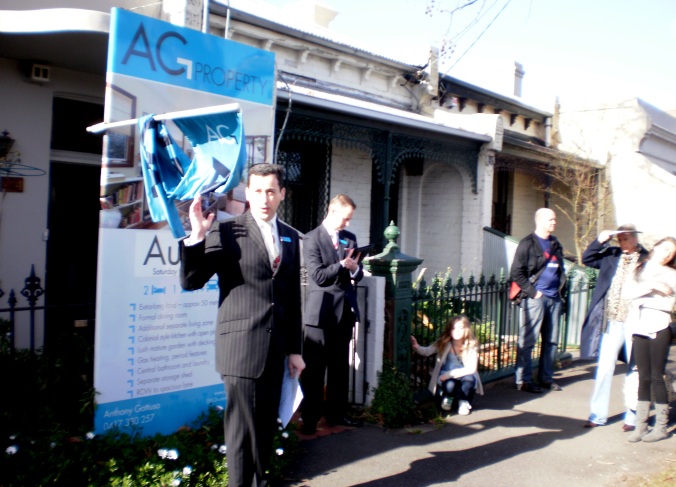 Review: This property was located opposite the Melbourne General Cemetary, in that classic long row of Victorian workman’s cottages. This home had been very well lived in and very well loved, it had oodles of charm. Two bedrooms with high ceilings, formal lounge with bright views to a miniature winter-garden, huge bathroom and modern kitchen with atrium-style casual lounge attached. The owner must have really loved their garden, because it was full of verdant trees, mature plants and had a nice decking area. The block was quite long, and when you ventured to the end of the garden, you discovered a little park. Anthony Gattuso (Director of AG Property) was both the listing agent and the auctioneer for this campaign. A stalwart of the Carlton and inner-north, Anthony made much of the value and location of this home. As he said ‘… demand will always outstrip supply in these inner-city areas, as they will not be building homes like these again’. He also reinforced to the bidding crowd the clarity of the auction process, and how being able to compete in public was a benefit to buyers. Anthony started off the auction with a vendor bid of $690,000 and swiftly a live bid of $700,000 was called. There were two main bidders in the fray (both very polite and deferential) who kept the bidding in 10,000 rises until they reached $800,000 where they were knocked down to $5000 rises. The property was on the market at $800,000 and eventually sold for $830,000. The crowd were amused by Anthony’s relentless insistence that the competing bidders should keep going, even asking for lower bids such as $1000 and $500. As he said ‘It’s only money… the bank’s got lots!’ A happy auction all in all.

This property had approximately 10,000 square feet of land. How do you like this for a huge inner-city backyard?

Punters: This was an auction where we assume there was an equal number of sticky beakers to those with good interest. It was a very diverse crowd and there was a festival-like air to the event. The home was situated in the heart of Thornbury, opposite lovely Penders Park and only a couple of block away from High Street’s public transport and shopping. It was also really close to a real live milkbar (they still do exist!) and a charming primary school. As such there were lots of families milling around – it would make the perfect house to raise kids in.

This house warmed the cockles of Hometruths’ heart, with charming features like this classic oven….

… and ticking grandfather clock which complimented the lush wood interiors of the front part of the home.

Review: This unique home was built by the vendor’s grandparents in 1914, and had been lived in by multiple generations of the same family. It was a mixture of architectural styles (including Edwardian, Georgian Revival and Art Deco) which mesh together quite lyrically, and it had a very friendly and loved atmosphere. Not a super-large home, it was nonetheless spacious with a formal dining and separate lounge area. We really enjoyed the internal picture-window fretwork in the dining room which was very ‘arts and crafts’ movement, as well as the kitchen with its classic ‘Kooka’ oven. The auction was called by Peter Egan of Nelson Alexander Northcote, who took the large crowd by the horns and gave them a good shake. There were three bids which Egan declined at the start of the auction – one at $590,000 – one at $650,000 and one at $900,000. Although gruff, he stayed strong and stuck to his guns, making a vendor bid of 1.2 million. After some cajoling, a bidder raised their hand and offered 1.220 before Peter and listing agent John Karr went inside to discuss with their vendor. Once the agents returned, the crowd relaxed and natural bidding started between 3 main bidders. From 10,000 bids to 5,000 bids – the property eventually sold for $1,405,000. This was a terrific weekend in the Melbourne market, where you could really sense a change in market sentiment. Hometruths look forward to our next weekend of reporting being equally optimistic.

It was a very mano v. mano kind of auction – check out the digger on the left in the dark suit observing auctioneer Peter Egan on the right.